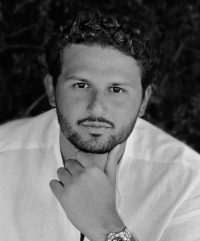 Andrea Reitano is a self-made italian businessman who has investments in a range of companies across hospitality , tech and real estate whose bold character and instinctual business acumen has projected him onto the global scene.

From a young age, Andrea Reitano had different goals to his peers. Andrea moved to Rome to study Economy and Finance, starting his university degree ahead at the age of 17. Supplementing his study with a job managing short lettings at a Real Estate agency, Andrea became exposed to an international set whose aspirational lifestyle inspired him to travel. So, with eight exams to finish, Andrea dropped out of university at 19, moved to London and began to learn English. What originally was two months, turned into six years, a lucky break and the beginning of a journey into the hospitality industry.

Pressure from family back in Italy meant that Andrea had to justify his sudden change of heart. To stay in London, he needed an excuse and immediately looked to his greatest and unceasing passion, food.

Andrea Reitano began to realise that his inspiration for food was different to many others. Growing up in Naples with a grandmother, who effectively was Andrea’s private chef up until the age of 13, instilled in him an emotive connection with food. For Andrea it is not the Michelin star or the fine dining that makes a restaurant great or elevates the food. It is the honesty, simplicity, memories and meaning that make culinary experiences unforgettable. Andrea’s ideas realised in project like Santo Mare in Marylebone, Osteria Romana in Knghtsbridge , Osteria Napoletana in Notting Hill , Forte Dei Marmi restaurant in Miami and  KOWA in Milan.

Each concept: a sefood restaurant or  an  intimate traditional  dining and a Pan-Asian hotel restaurant, appear different yet share the same values – quality over quantity. “Food makes up 51% of a restaurant. Service, design and ambience should make up the remaining 49% but it is the food that should be given the greatest attention. I find more and more restaurants, especially in London, where they have flipped the formula and as a result, have been unsuccessful in their journey. I want to succeed so I will continue to concentrate on the elements that matter. ”

Andrea Reitano now divides his time between London, Milan, Miami and New York. Under his company, Reinvest, Andrea plans to develop and open 10  restaurants internationally, within 2021  from concept to reality as well. He also co-funded  a  marketing company SocialAsk and an Olive Oil company called Panta Rei.